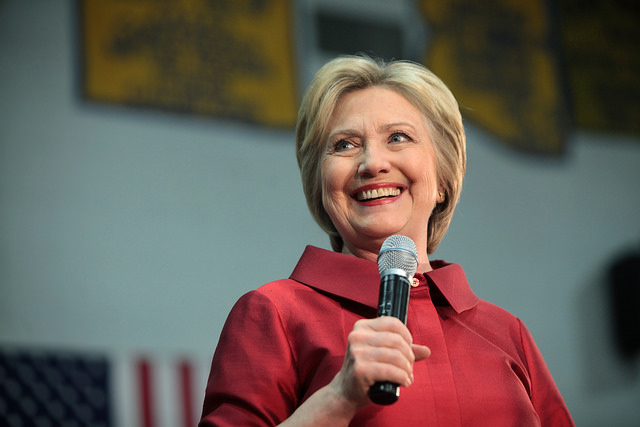 When the Democrats formally chose Hillary Clinton as their candidate for the presidency last month, she made history twice. Once as the first woman to be so nominated in the history of the country, and again as the first spouse of a former President to be given the honor. Due in no small part to the momentous nature of the former distinction, I feel as though the latter has been rather unfortunately brushed aside – but it warrants examination.

When Clinton wins the Presidency in November (she will), the highest office in the land will have passed between two immediate families for almost a quarter of a century: George H.W. Bush, Bill Clinton, George W. Bush (son of H.W.), Barack Obama, Hillary Clinton (wife of Bill). Seen this way, Obama’s presidency, which at the time of his election was supposed to herald a new age in American politics, seems less a watershed moment than a baffling aberration in the otherwise orderly passing of the presidency between Bushes and Clintons.

Indeed, in a wholly plausible alternate reality Clinton would now be campaigning against Jeb “Please Clap” Bush, making this 25-year trend 100% guaranteed to continue for at least the next 4 (rather than the 99.99% at which things currently stand).

Totally ignoring Clinton’s accomplishments, her scandals, and her policies, I believe this is a critical aspect of what her presidency will (or should be seen to) represent. Contrary to the egalitarian, “I’m working for the little guy” rhetoric that’s boilerplate for any political (especially Democratic) candidate, the simple fact of her candidacy is emblematic of just the opposite: that politics is a game of insiders and outsiders, where power and influence are conferred not by the public at large (the ultimate outsiders), but by networking, favor-granting, and elbow-rubbing at the highest levels of the private and public sectors.

This is not a novel observation; it’s one that every grumbling voter has known since they were children, listening to their own voting parents grumble through broadcasts of the evening news. What makes it noteworthy in the case of Clinton is not the fact itself, but the fact in its proper context: America in 2016. “Outsider,” as a political moniker, has become utterly meaningless apart from as a badge of honor to from which dredge up support from an electorate that feels increasingly marginalized and fed up with politics as usual. The Tea Party, which swept up seats across the country riding a wave of anti-Obama (racist) unrest in 2009, campaigned as a movement of “outsiders.” John McCain, Obama’s opponent in 2008, made a show of calling himself a “maverick” during his failed presidential bid. More recently the likes of Ted Cruz, Marco Rubio, Bernie Sanders, Jill Stein, and, yes, Donald Trump have all promoted themselves or been promoted by others for being outsiders.

That most of them are sitting career politicians doesn’t matter; what matters is that they want to make it clear to voters that they’re unsullied by the filth of politics as usual – they’re as fed up with the crony capitalism and backroom deals as anyone on Main Street. This tact strikes a resonant chord with voters, as should be obvious to anyone who sees the populist success of the Tea Party Movement, the Bernie Sanders campaign, and, again, Donald Trump.

So what has the Democratic party done in response to this mounting, obvious malaise and thirst for an leader from outside the Beltway? They’ve elected the ultimate insider, running on a platform of “everything’s fine!” and “let’s stay the course!” Why should this be the case, unless Clinton is simply the de facto, pre-anointed next in the line of succession?

To make what may seem to be an oblique connection, why, as Politico reported, did the DNC’s Hillary Victory Fund, ostensibly created at least in part to get money to state-level organizers and down-ticket Dem candidates, split all but $800,000 of its $142 million between the DNC and Clinton’s own campaign?

Apologies for Another Trite Observation

The obvious conclusion is that the Democratic establishment is utterly unconcerned with addressing or even really acknowledging the changing needs of the American people in anything more than a performative, perfunctory sense (Hillary is just like your abuela! #hispanicvote), with no interest in the passage of any meaningful progressive legislation. If they were, more money would be going toward state parties and down-ticket candidates. That’s where the sausage gets made.

Instead, the Democrats are interested in only one thing: the preservation of their brand as defined by the Clinton dynasty and the short-term securing of the White House to the exclusion of all else. If that means taking another round or few of an obstructionist Republican Congress, so be it. If this leaves the Democrats at a significant disadvantage in 2020 or 2024 when some politician with an ounce of savvy and an actual will to win takes a lesson or two from Trump’s uglier tactics, well that’s a bridge to be crossed when it’s arrived at. Hey, maybe Chelsea will be ready to run by then. Anything as long as Trump doesn’t win.