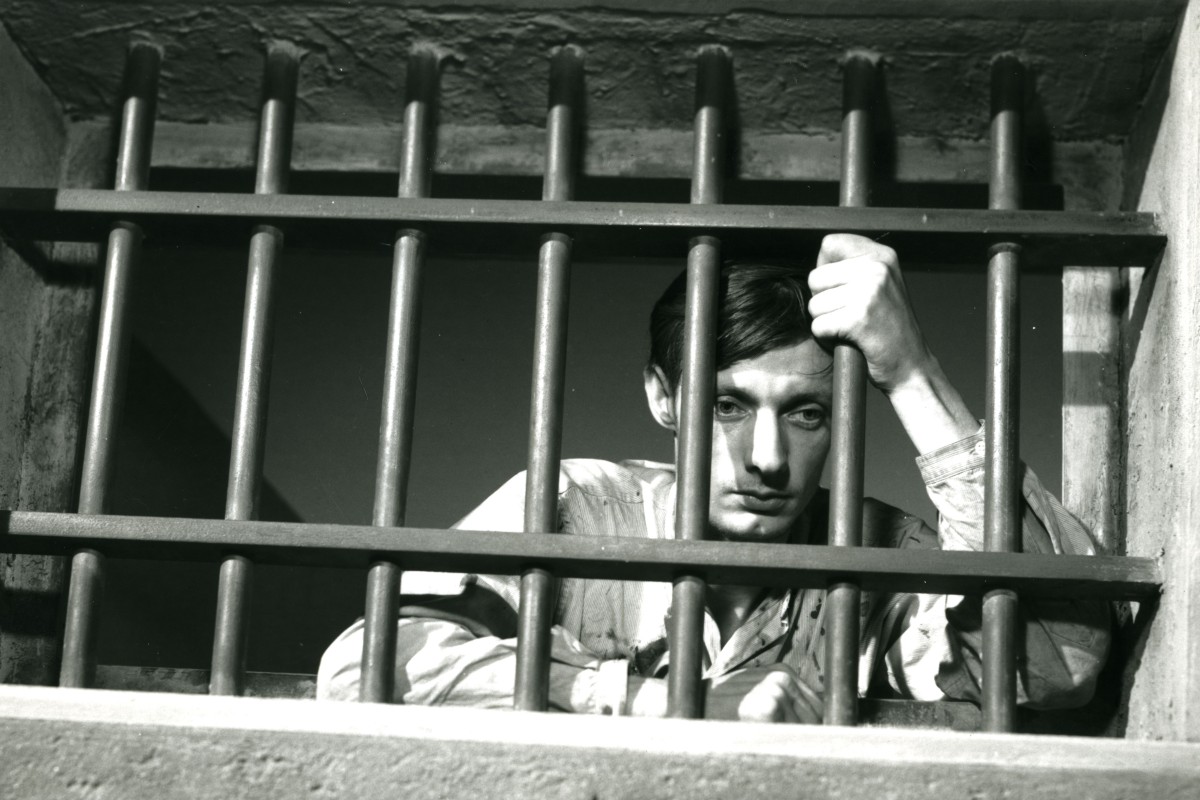 Marvel not that I said unto thee, Ye must be born again. The wind bloweth where it listeth, and thou hearest the sound thereof, but canst not tell whence it cometh, and whither it goeth: so is every one that is born of the Spirit.
John 3:7–8 (KJV)

Each of these moments reflects a shattering of illusion, a fierce visceral reaction to oppression, a desperate act in a totally hopeless situation. Liberation in these moments was not necessarily a material gain, but a fleeting lived experience; an existential reorientation from a relationship of domination to one of recalcitrance. Pure jouissance.
Serafinski, “Blessed Is the Flame: An Introduction to Concentration Camp Resistance and Anarcho-Nihilism“

“A Man Escaped” is a story of defiance. Robert Bresson’s film, based on the true story of French Resistance fighter André Devigny, depicts the drudgery of daily life in the Nazis’ notorious Montluc prison in Lyon, and the slow, disciplined escape of a man* named Fontaine.

From its very first moments, the tension between confinement and flight propels the film: Fontaine, just arrested for (we later learn) conspiring to bomb a bridge, waits for his moment to flee from the Gestapo car taking him to Montluc. The camera cuts between his hand hovering just above the door handle, his face, the road ahead as he observes it. He does make a break for it, when the car is cut off by a crossing trolley, but he doesn’t make it far. Once in prison, Fontaine promises the warden not to try another escape. “Who were we kidding?” Fontaine muses in his diaristic voice-over narration. “He certainly did not believe me. As for myself, I was determined to escape at the first opportunity.”

Bresson is a master of spare, functional film-making, and this strength serves the story well. Fontaine’s life in the brutal, austere prison takes on an almost meditative quality. By smuggling or crafting a few simple tools, he meticulously arranges for his own escape. There’s not much to see in Montluc — even the inmates, gaunt and unchanged from the filthy clothes they arrived in, all look the same — but everything Bresson’s camera captures is necessary.

That said, it’s the film’s sound that resonates (no pun intended). The approaching footsteps of a guard; the sound of gunfire as other, faceless prisoners are executed; the noises of Fontaine’s tools as he works to dismantle his cell’s wooden door; the crunch of gravel underfoot as he sneaks across the prison roof. With every sound comes the potential to be discovered and killed, or a reminder that someone else’s luck has already run out. Every sound is critical.

In terms of a musical soundtrack, “A Man Escaped” is sparse. There’s very little music, with the exception Mozart’s “Great Mass in C minor, K. 427,” which punctuates a few scattered moments: one or two instances where Fontaine and other inmates are allowed into the yard to wash up, the execution of prisoner following his own failed escape, and Fontaine’s ultimate success in the film’s final moments. Each an emergence out of some confinement or another, be from a cell, a prison, or one’s very mortal coil.

The subtitle of “A Man Escaped,”The wind bloweth where it listeth, is taken from a passage of the Gospel of John in which Fontaine finds solace. In it, Jesus explains to the Pharisee Nicodemus how one must be reborn to find salvation: “Verily, verily, I say unto thee, Except a man be born of water and of the Spirit, he cannot enter into the kingdom of God. That which is born of the flesh is flesh; and that which is born of the Spirit is spirit” (John 3:5–6).

With one’s flesh bound in a cell, is an unfettered spirit enough to be saved? Can one be truly reborn through struggle, or blind faith success? Maybe not, but it is better than the alternative.